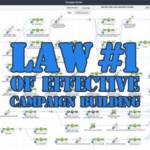 I'm not going to arrogantly tell you that my way is the right way. One of the beauties of Infusionsoft is that you have the freedom to do most anything you want with Campaign design – including making an incredibly difficult to understand, hard to troubleshoot, monstrosity of a “Frankenfunnel”. Yes, I said it – a Frankenfunnel!

What I can tell you is only what I refer to as my “Best Practices” – the things I do consistently in order to avoid mistakes (learned) from the past. After all, that's all experience really is, right? Experience just means that you've jacked things up many times and (hopefully) “learned” from it (or at least survived it). I can categorically tell you that I am quite “experienced” – I've made far more than my share of mistakes along the way.

But with that history I've come up with my own collection of Best Practices that I now follow to avoid the Frankenfunnels of the past and the pitfalls that go with them. This post will begin a series of several of the Laws of Effective Campaign Building.

A Frankenfunnel is a beast; a freak of nature; something no mere mortal should ever be expected to conquer; a campaign so hideously complex that the very sight of it – much like looking into the face of Medusa – causes you to immediately go into cardiac arrest. Now, I'm going to risk it. I'm going to show you an illustration of a Frankenfunnel, but please, please, please…. do NOT stare at it too long or you might just start to feel your chest tightening up.

Frankenfunnels are generally comprised of:

Oh, and just a couple of other important elements that define a Frankenfunnel:

NOTE: I'm also NOT going to show you but just a small portion of the Frankenfunnel because, for legal reasons, I don't want to be responsible for any long-term post traumatic stress disorders you might incur from seeing the “entire” beast in its raw form. Fortunately, as far as Frankenfunnels go, this one is quite tame and only about a 6 on the scale of 1 to 10. Okay, okay… I just have to show you ONE MORE… Now this one is a super small sub-set of the actual funnel, but as it's closer to a 8 or 9 on the Frankenfunnel scale, I just can't risk the physical trauma it could cause your mind to show you more: I always like to have structured start and stop points for my campaign. A campaign should have one or more goals that start the campaign and one or more goals to terminate the campaign. Also, every single sequence should be connected through to the end without any dangling sequences. Remember high school and your English teacher who scolded you for using dangling participles (something I do frequently – lol)? Well, the same is true for Infusionsoft Campaign Design – no dangling sequences! Here's what I mean: When I train people on this concept – whether online or in person with my clients – I always get objections. The primary objection is that they like leaving the “dangling sequences” because they want to see contacts that fall into that bucket via the reporting window of Campaign Builder. But this fear comes from misunderstanding. You shouldn't try to structure your campaigns to have dangling sequences just to queue up contacts for reporting purposes. The fact is that you should be using Goals for reporting purposes, NOT contacts queued in sequences.

But this fear is deeply held, so we have to go further. The root cause of this comes from the lack of understanding of how to actually report on campaigns. Most think that the visual reporting provided inside of Campaign Builder is where reporting is done. What they don't realize is that this is only a “convenient” way of looking at recent reporting data. The proper way to really report on Campaign Builder stats is via Marketing -> Reports -> Campaign Goal Report.

When you spend some time using this report you'll realize that other supposed limitations of Campaign Builder reporting go away. For example, many think that you can't get reports on contacts beyond 30 days – that's just not true! It's just that the visual reporting interface inside of Campaign Builder only goes back 30-days. But if you use the Marketing -> Reports -> Campaign Goal Report you'll be able to go back indefinitely.

Why is this Law Important?

Well let's just iterate a few of the reasons why Law #1 is important:

There are many more reasons, but those are some of the most important.

Stay tuned for many, many more Laws of Effective Campaign Building…