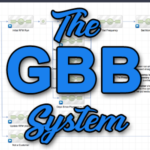 What's the simplest way to get someone to take action? You give them a “system”… a blueprint… a formula. Right? We all know it as marketers, so today, that's exactly what I'm going to do – I'm going to “market” you into my campaign development system!

But first, let's look at some of the major problems people face when building their campaigns…

The Challenges of Campaign Building

I've taught hundreds of Infusionites how to get more from Infusionsoft, how to harness the power of Campaign Builder, how to design robust funnels, how to setup sophisticated workflows and streamline their business and operations. Over the years of doing that, these are the most common issues or challenges that I see people face.

Now, tell me, do you spot the one thing in common with all of those challenges?

The all come down to lack of confidence!

One Product. One Funnel.

The GBB System is amazingly simple – so much so, that you may be very disappointed after the build up – but don't be. There is amazing power in simplicity. In fact, despite what you might thing, the most effective campaigns are usually the simplest campaigns. One of my most successful clients has, literally, only five campaigns in his Infusionsoft account. Of those, only one of them is a marketing campaign. That's right, just one campaign.

That one campaign is amazingly simple, yet sophisticated and elegant with nearly a year of refinement. That one campaign also does about $1.4M to $1.7M in revenue for him. But wait, it gets better. That's not annual revenue. That's monthly revenue. And the simplicity doesn't end there.

This same client only has one product. He doesn't have upsells or cross sells. He doesn't have other products in his funnel selling a million things. He has focused his entire business and business model on creating the most sophisticated and efficient way possible to sell his one product, via his one funnel.

This is the holy grail of simplicity – it truly is.

Now, you may be like me and think, “wow, how much money he's leaving on the table by not offering some upsells/downsells into that funnel”. But here's the thing. There is only so much energy to go around. He chooses to devote all of his energy into two tasks:

(a) Getting better at getting leads into his funnel (currently 4,000+ a day!)

(b) Refining and improving the conversion of his funnel

That's it. He simply doesn't want to spend the time or effort – or be pulled into another direction – by going off on a tangent with other products, downsells, cross-sells, etc… And ya know what, it works! It works because of the immense FOCUS he puts onto those two simple actions: get more traffic and convert it better.

So what is the GBB System? Well, if you're a little slow this morning and perhaps haven't had that second cup of coffee yet… and if you haven't “caught a hint” by now, it's about simplicity! GBB stands for Good – Better – Best.

First focus on getting your funnel done and “good enough to launch”. This doesn't mean you just slap it together with no thought or effort, but it also means that you don't obsess about what you “could do” and instead just focus on getting it done. Here's a little hint for ya… THERE WILL ALWAYS BE MORE WAYS TO TWEAK YOUR FUNNEL!

So don't obsess about those right now. Instead focus on the main goal of your funnel and the three or four step goals to get there.

If you don't know what a step-goal is, think about crossing a stream. You see this little stream in front of you and, being the gentleman that you are, you don't want your gal to have to get her feet wet crossing the stream. So you go grab some big rocks and you spread them out about every two feet across the stream until you reach the other side. Now she can just “step” her way across the stream without getting wet and you're the friggin' hero!

Lookie there…  you just got some dating advice slipped into a marketing automation post – lol!

But seriously, that analogy is exactly what you need to focus on in this stage of funnel building. In the GOOD phase, it's simply about defining (a) the main goal of your funnel and (b) the step-goals you'll need to execute on to get there. Let's break this down into practical terms.

If you're doing a webinar funnel, your main goal will be to sell your product – so you can put that purchase goal off to the right of your funnel, we know that's the destination. But then if you think back of the steps that someone will have to take to get there, the step goals immediately begin to fall out of the process. Now, at first, don't worry about the order of them or anything, just write them all down:

Okay, you get the point. But notice that I didn't particularly worry about the flow of the funnel or the order of the steps. At this first pass, it's just about getting those steps lined out.

Next you arrange them in the order necessary to complete your main goal, from left to right, and you start to lay out your funnel. What I recommend at this point is that you make every single step goal an actual “GOAL” in the funnel – a webform, a tag goal, an api goal, a link click goal, etc. This is where the magic begins to happen. You might have something like this:

Yes, I know – it's just a collection of goals and it won't work – they're not even connected. DO NOT WORRY ABOUT THAT RIGHT NOW.

If you will just focus on building the steps across the stream, I guarantee you that campaign building will become much, much simpler. There is a method to my madness and there is a reason why we focus on these step-goals first. What few people realize about Campaign Builder is how to effectively report on campaigns. But if you follow my methodology and start with the step-goals, your reporting structure will be built in from the beginning.

I don't want to re-hash that whole article here, but the point is that GOALS are what you want to report on, not sequences. And that goals can be easily viewed historically beyond the 30-day graphical view of Campaign Builder via reports (ok, go read that other article if you want to learn more). So, by using Step-Goals to lay out our funnel, we're creating the perfect infrastructure to report on later.

Next, you simply begin to work from left to right, filling in the missing pieces of logic. Yes, you may need some decision diamonds and branching logic, etc… but do not obsess on the whole campaign and the overall complexity of it. Instead, just focus on laying down that next step across the stream – one step at a time. Focus simply on the logic to advance your contact to the next step goal, working left to right, one step-goal at a time.

This process is what I refer to as the GOOD campaign. It will yield a result that is “good enough” to get out the door and you'll be able to design your entire campaign in a matter of a couple of hours or less of focused effort.

A Wrap for Today…

Okay, so this would be an enormous blog post if I were to continue down the path and explain the remainder of the GBB formula all in this one post. So I'm going to stop it for here today and we'll pick up next week with the BETTER part of the formula. Besides, I have to keep you coming back for more – right? I mean geez, this is “marketing” after all…  🙂

Questions? Comments? Leave 'em below and I'll get back to you…

Troy is the co-founder of MyFusion Solutions and is an Infusionsoft Certified Partner. Troy currently runs three businesses on Infusionsoft, runs training and coaching programs, a high-end Mastermind for Infusionsoft powered small businesses and is the author of the upcoming book Infusionsoft Mastery: The Definitive Best Practices and Strategic Implementation Guide.