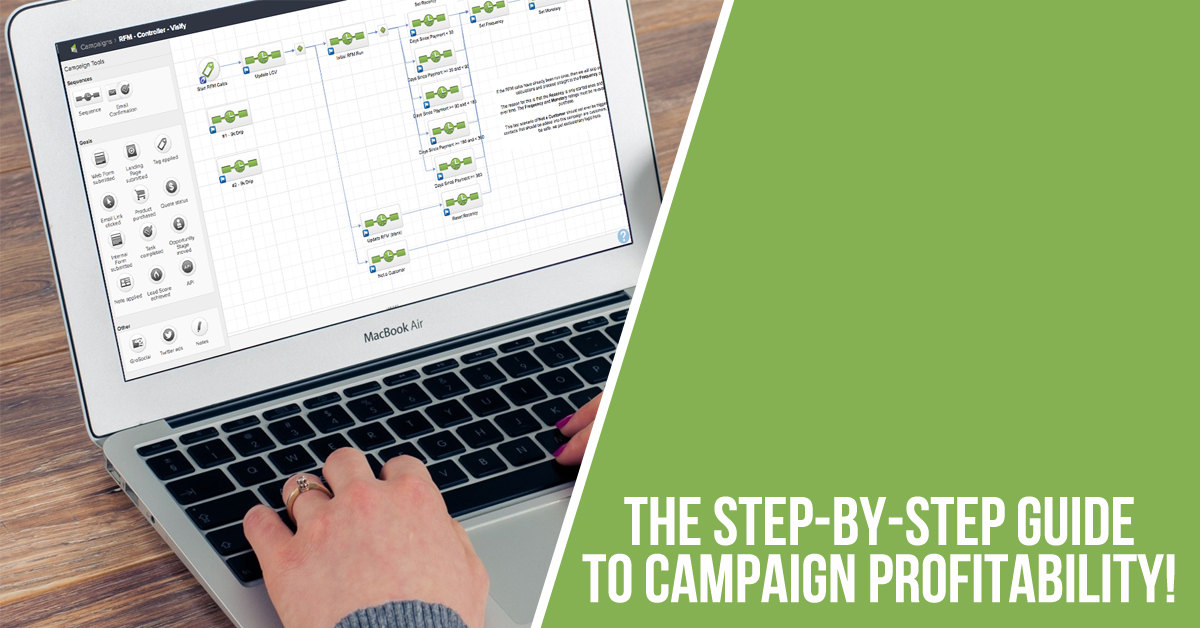 How to Determine Your Exact Campaign Profitability

If you've been following this blog for awhile now, you're probably beginning to spot a trend – I do a lot of posts on tracking ROI. The reason is quite simple, I consider myself to be more of a businessman than a marketer. That means what I'm most concerned with is profitability, not the size of my list or the latest whiz-bang marketing tactic d'jour.

One of the basic premisses of a campaign is knowing whether or not it is profitable. But how do you do that in Infusionsoft? You can report on orders and try to filter them by dates. But if you have anything more than a basic business with just one promo going on at a time, that will quickly become unmanageable and very inaccurate.

What you really need is to track the value of a lead in a given campaign.

This is especially critical for your very first campaign that you welcome new users onto your list with and present your core offer. Perhaps that campaign is a webinar campaign – as it is for many. Well, it's absolutely imperative that you know what the RPL (revenue per lead) is in order for you to calculate your PPL (profit per lead). Of course, you'll also need to track your CPL (cost per lead) – but that is likely being tracked externally in your traffic or lead gen efforts (Facebook perhaps?).

Before we start, don't confuse this with LCV (lifetime customer value). At this point, we're not concerned with the total lifetime value of a customer, we're really just concerned with how well this specific campaign is performing.

Why Do We Care?

Honestly, from what I've seen, most people don't. The reason I say that is that after having analyzed hundreds and hundreds of Infusionsoft apps, I can tell you that less than 5% of them have an accurate system in place for tracking customer and lead value.

To be fair, however, I don't think that means that most “don't care”, I think it's more a reflection of the fact that it's not trivial to do and most people just don't know how to set it up. So, if you're looking for an excuse to not do this of “I don't know how” – you should stop reading, ‘cuz I'm about to tell you.

The End in Mind

Always start with the end in mind. If you don't know exactly what you want to see, exactly what data you want to track and how you want to view it, well, you've lost the war before the battle has started! It may seem counter-intuitive to start at the end, but I can assure you its the most critical step to campaign building. Always start by defining the end objective.

In this case we want to know a dollar value for each lead that passes through our funnel. We want to know exactly how much revenue each lead has generated so that we can determine our overall campaign's value and be able to evaluate it's profitability.

How We Do It

We do it with a couple of different Helpers from MyFusion Helper. You may be able to do this without any custom API integration, but it would be extremely difficult and require a ton of decision diamond logic and elaborate tagging. It is, however, quite simple to do with just one Helper – the Math It Helper – and a single custom field.

We need the custom field to hold the value for our sales to each cont(act that passes through our campaign. We'll use the Math It Helper to add to that custom field for each purchase that they make within our campaign.

Now, if you have a super-simple campaign, this might not be necessary. However, most clients I work with have various product purchases and/or purchase variations within a single campaign to appeal to their prospects at different price points.

Even in a webinar example like I discussed earlier, there might be several different potential purchases within the campaign. Not all of these would necessary be in every campaign, but here's a list of possible types of offerings:

Again, it's extremely rare that you'd have all of those offers in a funnel, though I have seen very mature funnels that have been refined over many months that do. In the beginning, however, it's more advisable to just “keep it simple”.

But as you scale your business, you'll want to refine your funnel to provide ever more ROI. That is, if you're actually tracking or believe in that stuff (ha, ha).

The mechanics of the tracking is really pretty simple. After each purchase goal in the campaign, we want to call our Math It Helper to add to the one campaign tracking custom field the value of that particular purchase.

Now most people would put this logic right inside of the campaign. Most would simply use the Math It Helper to just add a hard-coded value of the product purchased right within the campaign. But after doing this for quite a while and seeing many campaign variations, I can tell you that's NOT the best way to do it.

The better solution is to:

Well, because if your campaign is longer than 30-days, you will want to be able to make sure that any payment plan purchases or month two recurring charges are also factored into the lead value statistics. If you put all of the tracking right into the core campaign, your values wouldn't include any recurring charges.

How the ‘In Campaign' Controlling Tag Works

Now I know that you can easily do that through campaign reporting or even the simple list of campaigns. But the problem with that is that since they're not tagged, you have no way of automated around that data. By tagging them as “in” the campaign, however, now when the campaign for “any purchase” fires, you can use a decision diamond to treat those that are “in” the campaign different than those that aren't and THAT is where we put the Math It Helper.

By abstracting the logic out into this secondary purchase campaign, however, we lose the immediate detail. We don't know if they just purchased a $1 item or made a $497 payment. That's where the Get the Last Helper comes in. It allows us to reference the last purchase made and read in those values. That allows us to grab the last purchase amount, stash it into a temporary field and then add it to the total spend for that contact within this campaign.

Please make sure that when you're doing the math for this that you're always reading the current value of the field and just adding to it and saving back into the same field. This way you only need just one custom field and it holds the cumulative campaign spend.

NOTE: You will need a second custom field “temporarily” when you use the Get the Last Helper in order to first store its value before adding it in with the Math It Helper. Personally, I just use some sort of temporary stash field for that and reset it (using the Clear It Helper) when done.

Okay, that's it! Now you have a single custom field that stores the total spend for each contact that passes through your campaign. With this data, you really have the “keys to the kingdom” because you are now armed with the knowledge that allows you to make a quick decision of whether this campaign is a winner or a loser, and if it's a winner, scale and refine it “until the cows come home” (yes, a little cowboy reference as I'm writing this blog post at 5:00am in a coffee shop in Spearfish, South Dakota).

Enjoy! And don't forget to signup for our Tuesday Tips newsletter at the link below if you're not already on the list.

Fill out the form below to get your free report